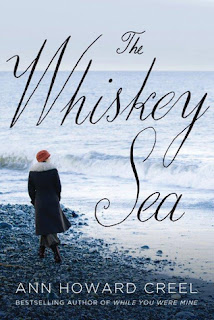 Motherless and destitute, Frieda Hope grows up during Prohibition determined to make a better life for herself and her sister, Bea. The girls are taken in by a kindly fisherman named Silver, and Frieda begins to feel at home whenever she is on the water. When Silver sells his fishing boat to WWI veteran Sam Hicks, thinking Sam would be a fine husband for Frieda, she’s outraged. But Frieda manages to talk Sam into teaching her to repair boat engines instead, so she has a trade of her own and won’t have to marry. Frieda quickly discovers that a mechanic’s wages won’t support Bea and Silver, so she joins a team of rumrunners, speeding into dangerous waters to transport illegal liquor. Frieda becomes swept up in the lucrative, risky work—and swept off her feet by a handsome Ivy Leaguer who’s in it just for fun. As danger mounts and her own feelings threaten to drown her, can Frieda find her way back to solid ground—and to a love that will sustain her?

The Whiskey Sea marks my first experience with author Ann Howard Creel. The premise captured my attention as I’ve not read a lot of Prohibition era literature and saw a degree of promise in the idea of a woman engaging in the transport illegal liquor.

Generally speaking, I feel that Creel capitalized on a lot of that promise. Frieda Hope is a thought-provoking protagonist and I liked the authenticity shown in her relationships with Silver and Bea. She’s intensely relatable and I liked how easy it was to understand the world as she saw it. I was also impressed with the tangible tension Creel created in the final chapters and I liked how those scene made me realize how invested I’d become in the narrative.

That said, I struggled with the pacing and tone of the story. The action was very drawn out and I didn’t feel the content necessitated the extended timeline. Frieda’s tendency to reflect on the morality of her activities as well as her love life allowed a lot of insight to her character, but after a while I found myself wishing Creel hadn’t wasted quite so much ink beating round the bush.

When all is said and done, I found The Whiskey Sea somewhat predictable, but I enjoyed the time and I spent with it and look forward to reading more of Creel’s work.

And then there was the hidden hope she told no one about, not even bea—that maybe someday there would be a man who understood her, who allowed her to be untamed, who understood her love of the sea, and who might love her despite her freewheeling ways. someday, some way…