Portrait of a Conspiracy by Donna Russo Morin 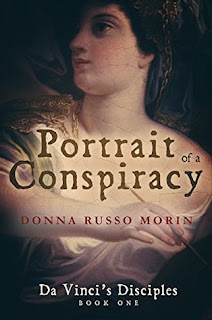 One murder ignites the powderkeg that threatens to consume the Medici's Florence. Amidst the chaos, five women and one legendary artist weave together a plot that could bring peace, or get them all killed. Seeking to wrest power from the Medici family in 15th Century Florence, members of the Pazzi family drew their blades in a church and slew Giuliano. But Lorenzo de Medici survives, and seeks revenge on everyone involved, plunging the city into a murderous chaos that takes dozens of lives. Bodies are dragged through the streets, and no one is safe. Five women steal away to a church to ply their craft in secret. Viviana, Fiammetta, Isabetta, Natasia, and Mattea are painters, not allowed to be public with their skill, but freed from the restrictions in their lives by their art. When a sixth member of their group, Lapaccia, goes missing, and is rumored to have stolen a much sought after painting as she vanished, the women must venture out into the dangerous streets to find their friend and see her safe. They will have help from one of the most renowned painters of their era the peaceful and kind Leonardo Da Vinci. It is under his tutelage that they will flourish as artists, and with his access that they will infiltrate some of the highest, most secretive places in Florence, unraveling one conspiracy as they build another in its place. 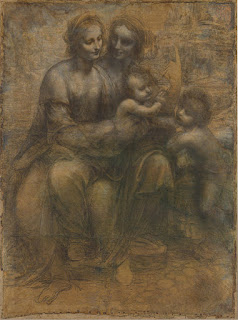 I’ve eyed Donna Russo Morin’s work for a long time, but Portrait of a Conspiracy is the first of her books that I’ve had opportunity to actually pick up. I wasn’t sure what to expect in terms of style and tone, but my track record with Medici fiction is fairly positive so I was relatively optimistic when I sat down and began chapter one. Ten pages later, I was hooked.

The intensity and chaos surrounding the assassination of Giuliano de' Medici had me biting my lip, but Morin’s introduction of Viviana and Fiammetta in the opening scenes was nothing short of stunning. Most authors of my experience take chapters to do what Morin accomplished in just a few pages and I couldn’t stifle my delight over the depth and complexity I recognized in Morin’s leads. My admiration grew as I got to know more of the cast and while I didn’t always appreciate the actions and sentiments of certain individuals, I was utterly admiring of the inherent authenticity of Morin’s characterizations.

I hardly know where to begin in looking at the historic elements of the novel. I admired that Morin didn’t shy from depicting the brutal realities of Florence’s streets, but I was equally entranced by the detail she offered in regard to the artistic techniques of the day. It’s obvious the author put a lot of time into researching the material, but I was particularly impressed with how comprehensive and dynamic Florence felt beneath her pen.

I found Morin’s themes equally captivating and while I loved the idea of woman defying convention to pursue their passions, I found myself absorbed in the more universal concept of ambition, its innate risks, and potential consequences. There is something extraordinarily human in the central motifs of the narrative and I liked how those ideas manifested themselves over the course of the story.

Morin’s elegant command of language and composition left me breathless, but the story itself, with its flawless depiction of power, corruption, defiance, intrigue and retribution makes Portrait of a Conspiracy an absolute must read.