Author interviews are one of my favorite things to post which is why I am super excited to welcome author Steven Greenberg to Flashlight Commentary to discuss his novel, Galerie. 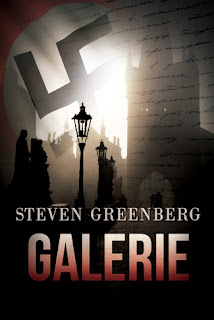 Welcome to Flashlight Commentary Steven. To start things off, please tell us a bit about Galerie.
Galerie is the story of a young woman’s quest for clarity, when her entire life has—to some extent—been lived in a fog. It’s a search for understanding in extraordinary circumstances. The protagonist is a young Israeli, born to Holocaust survivors. Not daring to question her parent’s wartime experiences while they’re alive, after they’ve both passed away she receives her father’s diary, which opens a literal Pandora’s box of discoveries. Along the way, she learns not only who her parents were, but who she is. I’ll leave the rest to my carefully-crafted book blurb:

After Vanesa Neuman’s father dies, the closed book of what he and her grandfather were doing during the Nazi occupation of Czechoslovakia falls literally open. From Tel Aviv to the backstreets of Prague, Vanesa’s relentless quest to unravel the mystery of her father’s wartime diary reveals a seventy-year-old secret darker than she could have imagined.

Your novel touches on some very powerful subject matter. Why did you want highlight the Holocaust and why do you feel the story is important for modern audiences?
I get the feeling that people are rather sick of hearing about the Holocaust. Certainly my perspective is shaped by my background (Jewish) and home (Israel); but as a student of history, I think it is fair to say that the Holocaust was the single worst crime against humanity in recorded history. So I don’t think it can ever be over-discussed or over-examined. The Holocaust remains highly relevant to any modern audience committed to preventing evil by learning from the past.

Galerie, however, is less about the Holocaust itself than it is about how evil resonates throughout history. The Holocaust is the backdrop for what Vanesa discovers, of course. But what interested me was how the book’s events—which happened before she was born—continue to affect her throughout her life. It’s as if exposure to pure evil leaves a genetic scar (there are studies that suggest this is true, by the way). I wanted to rip away this scab and see what was underneath.

At the beginning of the novel, Vanesa has no real knowledge of her family history and is forced to piece things together after the fact. Do you think many descendants struggled with the same kind of uncertainties?
Unquestionably. And most never learned the truth. I say this with some certainty partially because I lived with it for many years. My first wife was the daughter of survivors, and to the best of my knowledge never learned the actual specifics of what her parents went through during the war.

Beyond my personal experience, while researching Galerie I read a lot on this subject in books like Helen Epstein’s excellent Children of the Holocaust, and Amir Gutfreund’s Our Holocaust, to name just two. Not talking about wartime experiences was pretty much the rule among survivors.

This is exactly what intrigued me. As a parent, I’ve learned that kids can sense trouble and tension. In creating Galerie, I was eager to explore how the knowledge of a horrific past, coupled with the inability to ever clarify that past, affected a whole generation of children.

Vanesa's journey sets many obstacles in her path, but I found her emotional odyssey particularly fascinating. How did you, as an author, strike balance in your narrative and why was it so important for you to do so?
This is a great question.

In any character-driven fiction, the emotional journey is the crux of the story—the events are “just” the wrapping. That said, I’m personally often bored by literary fiction whose authors forget that they’re supposed to entertain me (the reader) with a good story, and not just muse on the ills of humanity.

I tried to make Galerie’s events as compelling as possible, so as to more effectively deliver the “real story”—Vanesa’s emotional journey. I did the same thing with my upcoming novel Enfold Me, and am attempting to do so in the new book I’m working on now. When writing, I constantly ask myself “Is this interesting to the reader? Does this compel them? Does this further the story?” My editor, of course, also played a huge role in cutting out the blah-blah and keeping the book on track.

What do you hope your readers take from their experience of your work?
On a historical level, I’d like to foster an understanding of why people with a personal connection to the Holocaust are still occupied with it. I’d like people to understand that it remains personally relevant because it is still a living and breathing part of us.

"...a story that will mesmerize readers from page one." ~ Singing Librarian Books

"...brings the psychological and cultural legacy of the holocaust up to date..." ~ Escapology Reviews

"Buy this book and say goodbye to your family for the weekend, because you will not want to put it down..." ~ Eric W. Swett

"Imagine Stephen King wrote Schindler's List..." ~ Nikki
"...so provocative that it is impossible to put down." ~ Sydology 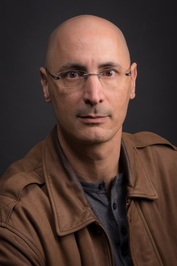 I am a professional writer and an Israeli. I am also a full-time cook, cleaner, chauffeur, and work-at-home Dad for three amazing young children, and the lucky husband of a loving and very supportive wife.

Born in Texas and raised in Fort Wayne, Indiana, I emigrated to Israel only months before the first Gulf War, following my graduation from Indiana University in 1990. In 1996, I was drafted into the Israel Defense Forces, where I served for 12 years as a Reserve Combat Medic. Since 2002, I’ve worked as an independent marketing writer, copywriter and consultant.