The Memory Weaver by Jane Kirkpatrick 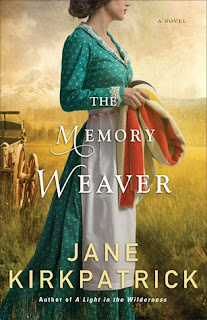 Eliza Spalding Warren was just a child when she was taken hostage by the Cayuse Indians during a massacre in 1847. Now the young mother of two children, Eliza faces a different kind of dislocation; her impulsive husband wants them to make a new start in another territory, which will mean leaving her beloved home and her departed mother's grave--and returning to the land of her captivity. Eliza longs to know how her mother, an early missionary to the Nez Perce Indians, dealt with the challenges of life with a sometimes difficult husband and with her daughter's captivity. When Eliza is finally given her mother's diary, she is stunned to find that her own memories are not necessarily the whole story of what happened. Can she lay the dark past to rest and move on? Or will her childhood memories always hold her hostage? Based on true events, The Memory Weaver is New York Times bestselling author Jane Kirkpatrick's latest literary journey into the past, where threads of western landscapes, family, and faith weave a tapestry of hope inside every pioneering woman's heart. Readers will find themselves swept up in this emotional story of the memories that entangle us and the healing that awaits us when we bravely unravel the threads of the past.

I owe my interest in Jane Kirkpatrick's The Memory Weaver to the artist who created the jacket. The contrasting colors caught my eye and while I wasn't overly enthusiastic over the premise, the imagery that graced the cover sparked something nostalgic in my imagination and prompted me to disregard any and all hesitation I felt regarding the material. Unfortunately for me, the narrative it concealed proved an uphill battle. I struggled with Kirkpatrick's style and tone from the first page to the last, I threw the book aside several times out of frustration, and more than once considered abandoning it altogether.

I understand the novel is inspired fiction, but I found Kirkpatrick's approach unabashedly preachy. I've said the same thing about a lot of Christian writers and I have been judged and openly harassed by many of their fans. I'm well aware that my opinions ruffle feathers, but I personally appreciate subtly and I'm not ashamed to admit it. I appreciate characters who live by their faith above those who shove it down everyone else's throats or play the ever-suffering martyr. It works for some, it just isn't a good fit for me.

I felt Kirkpatrick's interpretation of Eliza Spalding Warren almost identical to that of her mother, Eliza Hart Spalding and the lack of definition was incredibly annoying. The two share significantly similar names which caused confusion in and of itself, but the fact that the author failed to gift them individual voices amplified the issue tenfold.

I think the story would have been stronger if the author had abandoned the journal approach and told it from dual perspective of the Eliza and her mother before, during and after the massacre at Waiilatpu. I realize the author wanted to address family legacies and the dynamic between mother and daughter, but I didn't feel that angle had enough material to carry all three hundred and thirty six pages of this novel. It got lost in translation and didn't strike me as particularly compelling even when it shown through the events of Eliza and Andrew's marriage.

I don't know much about the Nez Perce, my knowledge base begins and ends with Chief Joseph, but I'm very familiar with Indian Country and sites such as Sand Creek, Washita, Wounded Knee and Little Bighorn and feel Kirkpatrick's effort shallowly representative of the complex history and culture of the native people. What little there is comes to the reader through Eliza who, in my opinion, possesses jarringly compassionate and modern ideas for someone who witnessed the 1847 Whitman massacre firsthand. Maybe it's just me, but I think the experience would have left her somewhat conflicted and felt Kirkpatrick's handling of the subject both superficial and unauthentic.

Atmospherically I've little to comment on. I've driven this part of the country more times than I can count and was disappointed that so little of it came to life under Kirkpatrick's pen. The characters also failed to impress and their emotional journeys didn't capture or captivate my imagination. Other reviewers have been mightily impressed with The Memory Weaver, and while I can appreciate varied opinions and tastes, I can't say I share in their admiration or delight.

Was that what I was being? I didn’t want stubborn to be the legacy I gave my girls or my sisters. I wanted them to see strength in their heritage, to learn that that they could grow from challenges face. Yes, I could tell a travel story, of my escape from terrible harm. But was that the only story I wanted to be remembered for? No, I wanted them to remember their grandmother’s courage, and see a bit of that inside of me and themselves.

I know that you struggled with reading this one, but I think this was a fair review. I knew this author's name sounded familiar, but not because of this title. I actually have a prior title from this author, Into the Wilderness, on my Kindle. So I'm not sure about how excited I am to read it...

What is Into the Wilderness about? I don't see it on the author page on Goodreads.