Interview with Nathan Dylan Goodwin, author of The Orange Lilies

Author interviews are one of my favorite things to post which is why I am super excited to welcome author Nathan Dylan Goodwin to Flashlight Commentary to discuss The Orange Lilies. 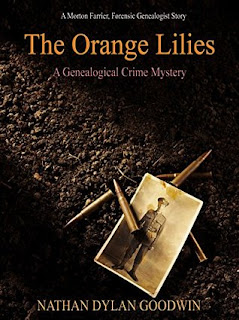 Welcome to Flashlight Commentary Nathan. It’s great to have you with us. To start things off, please tell us a bit about The Orange Lilies and Forensic Genealogist series.
Thank you for having me! Okay, so The Orange Lilies is a novella that can be read either as a stand-alone story or as a part of the Forensic Genealogist series. Technically it’s book 2.5, but Amazon weren’t keen on the decimal!  As with the other books in the series, it has a dual narrative—one running in the modern day and one running in the past—in this case, December 1914. The other books in the series have featured the forensic genealogist, Morton Farrier investigating mysteries, murders and mayhem in other people’s family trees, but in this book Morton gets to spend some time uncovering his own ancestors’ secrets. The past narrative shows the opening months of WW1 from the perspective of Morton’s great great grandparents, Charles and Nellie Farrier.

The books all feature Morton Farrier. Can you tell us about his personality and point of view?
Morton was told at the age of sixteen that he was adopted, which created a shadow over his life that was partly the motivation for his becoming a forensic genealogist. His stubbornness and determination to help others reveal their family mysteries has been a way for him to ignore questions over his own past. Fascinated by history, he lives in a quirky house in Rye, England with his fiancée, Juliette. He doesn’t like to travel too far, so all of his cases have been in the South of England! He’s got a dark sense of humour and a bit of an addiction to coffee.

Why do you think your books appeal to so many readers?
I’m very fortunate that my books overlap several genres—crime, mystery and historical fiction, so that gives me quite a scope for readership. However, it is the genealogical aspect to my books that appears to have the largest appeal; genealogy is a niche market, but it’s a big niche! Genealogists, by definition, love a good mystery, so they seem to enjoy my books! The positive feedback from the genealogy community has been tremendous.

The Orange Lilies features many memorable characters, but I was particularly struck by Margaret and Nellie. How would you describe these women and who or what inspired them?
In the early stages of writing The Orange Lilies, Nellie was a bit more of a background, passive character whose actions and behaviour were dictated by people and events around her. She felt to me like a much stronger, decisive character than she was coming across, so in the redrafts of the story, much more of her personality and strength came through. Then, as the story developed, she actually became the linchpin of the story, providing one of the links from past to present. Nellie’s granddaughter, Margaret provides the other link. The Orange Lilies shows Margaret’s transition from a young, naïve schoolgirl through some difficult times to becoming a crucial element in Morton’s elusive past. I really enjoyed writing both these characters and, alongside Morton’s fiancée, Juliette, they provide a colourful contrast to the men in the story.

Charlie’s experiences in the trenches of WWI are brilliantly imagined in the novella. Were they difficult to write considering the nature of the material?
Yes, very! The book has been the most difficult of the series to write so far because the past narrative is based on the real diaries of the Second Battalion of the Royal Sussex Regiment, something that I felt it was very important to get right. It was difficult trying to negotiate the need to tell the facts of the story whilst also attempting to bring something new or different to a period of time that has been written about so frequently and so well already. I read a lot around the subject and tried to imagine how I would have reacted to such horror and acute distortion of humanity; by the end of my research, I had a really deep sympathy for those men and what they had to endure.

What sort of research went into The Orange Lilies? What sources did find most valuable?
I tried to steer away from other people’s fictional accounts of WW1 and concentrate on the factual accounts and letters of soldiers who were serving in the trenches. The main basis of the research was the unit diaries of the Second Battalion of the Royal Sussex Regiment, that gave in-depth information on the locations, movements, activity and casualties on a day-by-day basis, which I replicated in the book. I had already researched some of the wartime activities of the Royal Sussex Regiment, as two of my relatives served with them. The other main research that I undertook provided the genealogical aspects of the book, all of which are real.

You probably have many, but is there a scene you particularly enjoyed writing?
I always enjoy developing the subplot of Morton’s background, so it was lovely to see him make progress on that front! But I think the scene I enjoyed writing the most was probably the 26th December 1914, when Charles Farrier has an epiphany that changes the course of his life and the lives of those around him. His decisions that night have a far-reaching impact that even stretch through to Morton in the modern day. This scene is the only part of the past narrative involving Charles Farrier which is not based on the unit diaries, so there was an element of extra freedom there!

What scene posed the greatest challenge for you as an author? Why was it troublesome and how did you work through it?
I found the biggest challenge was writing the factual scenes involving death on such a large scale. In one scene Charles Farrier is sent out to check the wire perimeter, only to be confronted with more than a hundred dead German soldiers. What must that have been like? It was very hard to imagine what must have gone through the minds of those men surveying such regular atrocities. The soldier who accompanies Charles is full of a patriotic elation at their deaths, but Charles just can’t find it, as he sees them for who they really are: young men just like him. Although the scale of the destruction was a challenge to write, it helped solidify Charles’s personality and his eventual stance on the war, which informs his actions towards the end of the book.

Sometimes fiction takes on a life of its own and forces the author to make sacrifices for the sake of the story. Is there a character or concept you wish you could have spent more time on?
I had always intended this book to be a novella, so I knew that some sacrifices in the story and character development would be necessary. I would like to have spent more time with Nellie and her back story—I’m sure she had a very intriguing past and lots of challenges in her life that made her the woman she was in 1914. I’m sure she would have been an active suffragette!

Historical novelists frequently have to adjust facts to make their stories work. Did you have to invent or change anything while writing The Orange Lilies and if so, what did you alter?
I really didn’t want to change anything, so that the book followed the unit diaries exactly, however I just couldn’t make the ending of Charles’s story fit, so I did make up the entry for the 26th December, which I admit to at the end of the book!

If you could sit down and talk with one of your characters, maybe meet and discuss things over drinks, who would you choose and why?
I wouldn’t choose Morton or Juliette—I feel I know them well enough already! I would actually probably choose Nellie because, as I mentioned above, I think there’s a lot more to her than meets the eye, although I think she would be very guarded about her past so I might not get very far.

Just because I’m curious, if you could pick a fantasy cast to play the leads in a screen adaptation of The Orange Lilies, who would you hire?
Tricky one! I’ve been asked this before, and I’ve come up with the British television actors Julian Ovenden and Keeley Hawes for Morton and Juliette. As for Nellie and Charlie…maybe Michelle Dockery and Luke Treadaway. I’d quite like Pam Ferris for the modern Margaret Farrier. Can you arrange it, please?

Believe me, I would if I could. I'd love to see this story on the screen!

Finally, what's next for you? Do you have a new project in the works?
Yes, I have just published the follow-up book to The Orange Lilies, entitled The America Ground. It’s a full-length novel which sees Morton working on a new case, but he does still find some answers to the questions and mysteries raised in The Orange Lilies about his own past. I’m now working on the next installment of the series!

PRAISE FOR THE FORENSIC GENEALOGIST

"Flicking between the present and stories and extracts from the past, the pace never lets up in an excellent addition to this unique genre of literature." - Your Family Tree

"At times amusing and shocking, this is a fast-moving modern crime mystery with genealogical twists.  The blend of well fleshed-out characters, complete with flaws and foibles, will keep you guessing until the end." - Family Tree Magazine

"As I have read books in the past, I can usually tell almost from the beginning how it will probably end. That is not the case in this crime mystery. Each chapter, with its twists and turns, gave me new clues and had me trying to figure out the puzzle that Morton was trying to solve." - Tina Sansone, Amazon Reviewer

"I couldn't put this book down! I stayed up half the night reading it, and finished it the next morning. What a fine blend of history, mystery, genealogy and great story telling." - Seashell, Amazon Reviewer 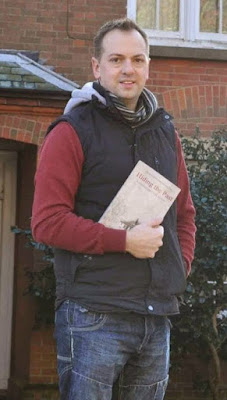 Born in the famed battle town of Hastings, England, Nathan Dylan Goodwin has always had a passion for writing in one form or another. Having gained a 2:1 degree in Radio, Film and Television studies, Nathan went on to gain a Masters degree in Creative Writing, from Canterbury Christ Church University.

Nathan started his writing career with non-fiction, his first book ‘Hastings at War’ being published in May 2005. This was followed by three further local history books pertaining to the area around his home town of Hastings. His first forays into fiction writing culminated in the publications in 2013 of Hiding the Past (a genealogical crime mystery novel). This was followed up in 2014 with The Lost Ancestor, the second in the Forensic Genealogist series.

In his mid-thirties, Nathan enjoys reading, genealogy writing and time with his family and young son.