To Catch a Falling Star by Anna Belfrage 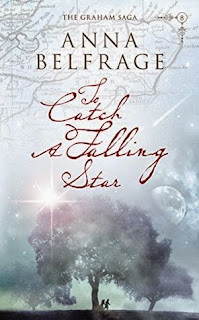 Some gifts are double-edged swords... For Matthew Graham, being given the gift of his former Scottish manor is a dream come true. For his wife, Alex, this gift will force her to undertake a perilous sea journey, leaving most of their extensive family in the Colony of Maryland. Alex is torn apart by this, but staying behind while her husband travels to Scotland is no option. Scotland in 1688 is a divided country, torn between the papist Stuart king and the foreign but Protestant William of Orange. In the Lowlands, popular opinion is with Dutch William, and Matthew’s reluctance to openly support him does not endear him to his former friends and neighbours. While Matthew struggles to come to terms with the fact that Scotland of 1688 bears little resemblance to his lovingly conserved memories, Alex is forced to confront unresolved issues from her past, including her overly curious brother-in-law, Luke Graham. And then there’s the further complication of the dashing, flamboyant Viscount Dundee, a man who knocks Alex completely off her feet. All the turmoil that accompanies their return to Scotland pales into insignificance when a letter arrives, detailing the calamities threatening their youngest daughter in Maryland – at the hand of that most obnoxious minister, Richard Campbell. Matthew and Alex have no choice but to hasten back, no matter the heartache this causes. Will they make it back in time? And what will Richard Campbell do?

I’ve a confession folks, so I hope you don’t mind if start there and get it off my chest. I was over the moon when I received my copy of Anna Belfrage’s To Catch a Falling Star, but a part of my didn’t want to read it. I’ve loved each and every installment of the Graham Saga, but I wasn’t ready to say goodbye. Truth be told, I’m still not.

That said I think this installment of the series is my favorite. The writing itself feels much stronger than it did in book one and I love the contrast in how these characters have grown over time, how experience has altered their views and solidified certain elements of their personalities. More importantly though, I loved how this book, more than any other, complimented A Rip in the Veil. The story brought closure to so many key points and functioned as a flawless bookend to some of the most sensitive elements of the saga.

Don’t get me wrong, the historic hallmarks of the series are still there, but this time around it was the Alex and Anna’s emotional journey that struck a chord in me. You read that correctly, I did just reference the author, but in all fairness her personality and passion shines through this piece, as unmistakable and profound as the star that graces its cover. I think every author puts a bit of themselves into their work, but this is one of the rare occasions in which I felt the story gave insight to the creative spirit behind it.

I’ve never been against time slip novels, but I didn’t consider myself a fan until reading these books. I’ve enjoyed each and every one and recommend them as one of the best fiction I’ve had fortune to come across.

Matthew tightened his grip on Alex's hand. My miracle lass, my gift from God.