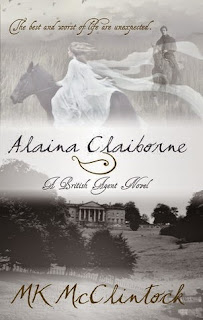 How far would you go to avenge your family and save the one you love? In nineteenth-century England, Alaina Claiborne had a loving family, a cherished friend, and devoted servants. She spent her days riding across the grassy hills of the English countryside, joyful and at peace. Then tragedy strikes and her world is forever changed. Searching for those responsible is her only focus... until she meets Tristan. Tristan Sheffield, a man of many talents, searches out those who don’t want to be found. His past is filled with secrets and deeds he would rather leave deeply buried. However, when his life unexpectedly entwines with Alaina's, he soon discovers they share more than a mutual desire to catch a murderer. On their hunt for a man driven by greed, Tristan and Alaina find that love is the greatest weapon against evil, and they'll stop at nothing to survive.

I have mixed feelings about Alaina Claiborne by M.K. McClintock. It's a nice story and entertaining in it's way, but I felt like I knew where it was going most of the time and that sense of predictability didn't have me sitting on the edge of the seat.

I don't mean to sounds harsh or turn anyone from the novel. McClintock's characterizations are quite interesting, her settings are delightfully original and the plot has a lot going for it in terms of movement. It's a fun piece, it just didn't have the ambiguity and tension I'd anticipated going in.

That said, I'm excited about moving forward with the British Agent series. My expectations were a little off base and certainly colored my experience with the novel, but I enjoyed the time I spent with it just the same and am interested to see what McClintock will offer readers Blackwood Crossing.

Tristan remembered ever man and every move. He has seen two of his agents go down, each taking a culprit with him. One had escaped, but he couldn't recall how. They might be the best at what they did, but they had made a deadly mistake. Tristan once again studied his partners and friends. Neither would forget what happened either. They woman and child's screams promised to haunt them all for years to come.