Days of Sun and Glory by Anna Belfrage 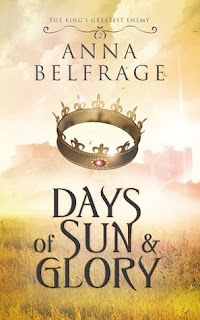 Adam de Guirande has barely survived the aftermath of Roger Mortimer’s rebellion in 1321. When Mortimer manages to escape the Tower and flee to France, anyone who has ever served Mortimer becomes a potential traitor – at least in the eyes of King Edward II and his royal chancellor, Hugh Despenser. Adam must conduct a careful balancing act to keep himself and his family alive. Fortunately, he has two formidable allies: Queen Isabella and his wife, Kit. England late in 1323 is a place afflicted by fear. Now that the king’s greatest traitor, Roger Mortimer, has managed to evade royal justice, the king and his beloved Despenser see dissidents and rebels everywhere – among Mortimer’s former men, but also in the queen, Isabella of France. Their suspicions are not unfounded. Tired of being relegated to the background by the king’s grasping favourite, Isabella has decided it is time to act – to safeguard her own position, but also that of her son, Edward of Windsor. As Adam de Guirande has pledged himself to Prince Edward he is automatically drawn into the queen’s plans – whether he likes it or not. Yet again, Kit and Adam are forced to take part in a complicated game of intrigue and politics. Yet again, they risk their lives – and that of those they hold dear – as the king and Mortimer face off. Once again, England is plunged into war – and this time it will not end until either Despenser or Mortimer is dead. Days of Sun and Glory is the second in Anna Belfrage’s series, The King’s Greatest Enemy, the story of a man torn apart by his loyalties to his lord, his king, and his wife.

I didn’t think twice about picking up Anna Belfrage’s Days of Sun and Glory. I’ve read all of Blefrage’s other books and I enjoy her style and tone a great deal. I feel that her stories strike a nice balance between fact and fiction and the depth of her research shows an obvious passion for the history on which her work is based, but it is her representation of people that always stands out in my mind. As an author, she puts a lot of effort into illustrating individuals and the relationships they share with others and I think that brings something very special to her books.

Adam de Guirande is one half of Belfrage’s leading couple, but if I’m entirely honest, I enjoyed his arc more than any other. He suffers a crisis of divided loyalties and his sentiments and allegiances place both himself and his family in politically precarious positions. He is forced to make hard choices and his actions have rippling consequences that are most often shared by his wife, Kit. Maybe it’s just me, but I find something very authentic in that and I appreciate Belfrage for capturing it as she does on the page.

Isabella also stood out to me. I’ve seen Isabella of France portrayed many ways, but I feel that Belfrage’s interpretation really capitalizes on Isabella’s she-wolf reputation. The is a fundamental fire and innate ferocity in Isabella that sets her apart from other women in the narrative and while I appreciate the historical parallel this illustration creates, I love the idea that Isabella’s nature was as challenging for her allies and it was her enemies. Here again, I recognized a very realistic association and reveled in the genuine conflict it created within the fabric of the novel.

The last character I want to mention is Cassandra. She enjoys a smaller supporting role, but she intrigued me nonetheless. Like Isabella, she boasts an abundance of confidence and daring, but her application of those strengths lead her to a very different end and I thought that contrast incredibly interesting. That said, she is a remarkably self-serving creature without compunction of any kind and her lack of scruples makes her incredibly dangerous. She exemplifies a darker reality and I think there is a lot of merit in exploring those concepts and motivations as there is in emphasizing the good.

I don’t mean to downplay the historic context of the narrative as I feel Belfrage’s recreation of the political conflicts that plagued Edward II’s reign truly impressive. I simply appreciate the human qualities her characterizations bring that conflict and how her presentation and approach guides her readers through turmoil of the era. Her style gives depth and emotion to the dramatic power struggle and invites her audience to experience it in a truly unique way.

“… with his jaw set, his eyes narrowed into piercing blue shards, her prince no longer looked like an untried youth – he looked like the future king he was destined to be. A king coerced into taking part in a venture he did not approve of, and someday those that forced him would pay. She crossed herself, praying that she would be nowhere close to either the queen or Lord Mortimer when that happened.”

I look forward to reading this one. Nice review!