A Chance Kill by Paul Letters 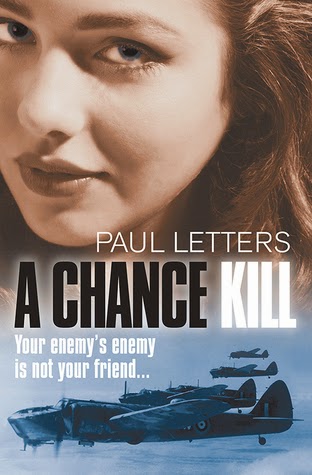 An old-fashioned love story weaves through an authentic wartime thriller. Can individuals shape destiny? Or is it all by chance? Based upon real events, seventeen-year-old Polish catholic Dyta Zając finds herself forced away from wartime Warsaw due to her family’s shadowy connections. Dyta’s time on the run sets her on a path towards confronting the ultimate Nazi. Half a continent away, an RAF bomber crew embarks upon Britain’s little-known first offensive of the war. In a story of fear versus hope, the unspoken limits of loyalty are exposed and the value of a compromised life is contested. Courtship edges Dyta’s destiny closer to that of members of the RAF crew – and toward the Allies’ most brazen covert operation to strike at the Nazi elite. Even more dangerous than the enemy, however, is the assumption that your enemy’s enemy is your friend...

Paul Letters' A Chance Kill is an interesting piece. It captures the macro level politics of the period, but like Sofi Oksanen's Purge and Philip Schultz's The Wherewithal, it also delves into less well-known chapters of WWII, affording readers both new insight and distinct intrigue.

This is ambitious storytelling that covers much of Europe. It is at times intense, but I personally thought Letters' tone appropriate for the material at hand. The writing is heavily detailed and while I sometimes felt the sheer volume of information detrimental to the novel's pacing, I can't deny being impressed by the research Letters put into his work.

I wasn't much for the love story, but that's just me. I liked how the soft emotions between Letters' lovers countered the tension and desperation of the resistance movement and their operations, but the romance itself didn't hold a candle to the darker drama at the heart of the novel.

A Chance Kill is a weighty fiction, but an enjoyable one that proved well-worth the time I put into it. I wouldn't recommend it as casual reading, but fans of war era thrillers should have no trouble getting lost between these pages.

She recalled one of the dictums Captain Sykes had drummed into her on training. Don’t focus on what you don’t know how to do – execute what you have learned with precision and speed.