Interview with Christian Kachel, author of Spoils of Olympus: By the Sword

Author interviews are one of my favorite things to post which is why I am super excited to welcome author Christian Kachel to Flashlight Commentary to discuss Spoils of Olympus: By the Sword. 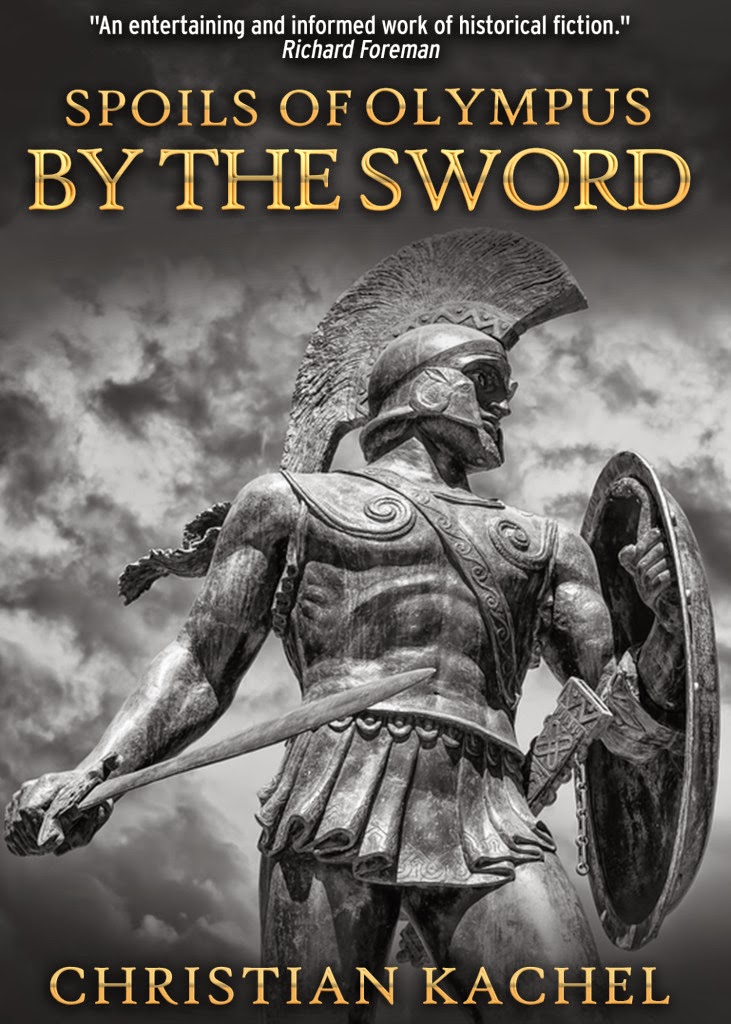 Welcome to Flashlight Commentary Christian. It’s great to have you with us. To start things off, please tell us a bit about By the Sword.
The Spoils of Olympus has been a 2 1/2 year project that began in a Marriott hotel room in San Antonio, Texas while attending pre deployment training for a tour in Afghanistan in late 2011.  By the Sword is the first novel in The Spoils of Olympus series and follows its protagonist from an adolescence of criminality and capriciousness to his forced enlistment in the wars of succession following the untimely death of Alexander the Great.

How did you first become interested in the Macedonian Empire?
The Macedonians have always fascinated me since I took a class on Alexander the Great in college.  Many great novels have been written about ancient Greece and Alexander but few fictional works have explored the war of succession where Alexander's generals, who were once allies, battled each other for control of the largest empire on earth.  Many people don't realize just how successful the Macedonians were on the world stage prior to the rise of Rome in the east.  Greek/Macedonian generals were fighting it out for hundreds of years after Alexander from Afghanistan and India to Italy and everywhere in between.

What lessons do you think modern readers can take from By the Sword?
I think we can reflect and be thankful for the ease and safety of life we have become accustomed to in the 21st century (current conflicts aside).  It certainly wasn't that way for many of the characters living in the post-Alexander world.

As the mother of a young boy, I was particularly impressed with how you illustrated Andrikos’ journey to manhood. Was it difficult to balance the emotional aspects of his character against the social expectations and violence of the period?
It was important to not view the society of the time through a 21st century lens.  That being said, it was a bit if a balancing act to give voice to Andrikos' emotions while navigating the hardships he encountered.  Use of the first person narrative helped bring this forth.  Some are not fans of first-person but I think it was the right voice for this story because so much of it is about Andrikos' path to manhood.  He is rough character but has many inner-insecurities that he must overcome.  It is my hope that all of this made him 'real' to the reader.  Many historic novels with military themes have characters whose bravery and character are unrelate-able to most readers.  Being in the army myself I know this isn't usually the case and I think you'll agree that my characters have some serious flaws.

Can you tell you tell a bit about Mara and her role in the story?
I'm glad you asked about her.  She was never intended to exist in the story.  I did not start writing the novel with her in mind.  But true to her character- she shot out of me onto the page one day to make her presence known and the book is much better off with her in it.  There were a number of strong female personalities vying for power back then- most did not fare well in the end, but Mara's strength comes from within, not from her familial lineage.  Her fate is uncertain by the end of the first novel but she will have a strong role to play in the sequel.

Another character that caught my eye was Vettias. Who or what inspired him?
A strong contributor to Andrikos' personality was the lack of strong male figure that cared about him. Vettias is the representation of everything Andrikos has wanted in a male role model- despite being fairly flawed himself.  Vettias' character was compiled of many individuals I've come across in the Army- not to say they behaved the same way he did, but people who were older role models to me.

You probably have many, but is there a scene you particularly enjoyed writing?
I enjoyed writing the scene between Vettias and Queen Adea in her quarters at the Triparadeisus Summit.  It was fun to have two strong-willed characters matching wits.

What scene posed the greatest challenge for you as an author? Why was it troublesome and how did you work through it?
I am still not comfortable writing sex scenes and although there are a couple in the novel, it is never easy for me.

Sometimes fiction takes on a life of its own and forces the author to make sacrifices for the sake of the story. Is there a character or concept you wish you could have spent more time on?
Since the story is told from the first person, we don't get to have too many interactions with the real historical figures in the first book.  Andrikos will be interacting with much more of them in the second but Andrikos' character, and the story itself, hadn't developed to the point where he was holding court with Alexander's generals.  We will meet them more intimately in the sequel.

Historical novelists frequently have to adjust facts to make their stories work. Did you have to invent or change anything while writing By the Sword and if so, what did you alter?
The existence of a secret society based on protecting the heirs of Alexander the Great was created by me.  Though this group is very plausible, we have no documents pointing to any such group existing.

If you could sit down and talk with one of your characters, maybe meet and discuss things over drinks, who would you choose and why?
I think it would either be Vettias or Andrikos' brother-in-arms, Stephanos.  Both have a lot to say and spend an inordinate amount of time drinking.

Finally, what's next for you? Do you have a new project in the works?
I am currently writing the sequel- should be completed late this year.

PRAISE FOR SPOILS OF OLYMPUS: BY THE SWORD

“I can't wait to see what adventures await Andrikos in the next installment." - Uri I., Amazon Reviewer

“Once I started reading the book, I could not put it down.” - Jamie Buck, Amazon Reviewer

“Kachel does a wonderful job portraying the development of Andrikos from awkward, immature youth to confident and skilled operative.” - Kirkus Reviews 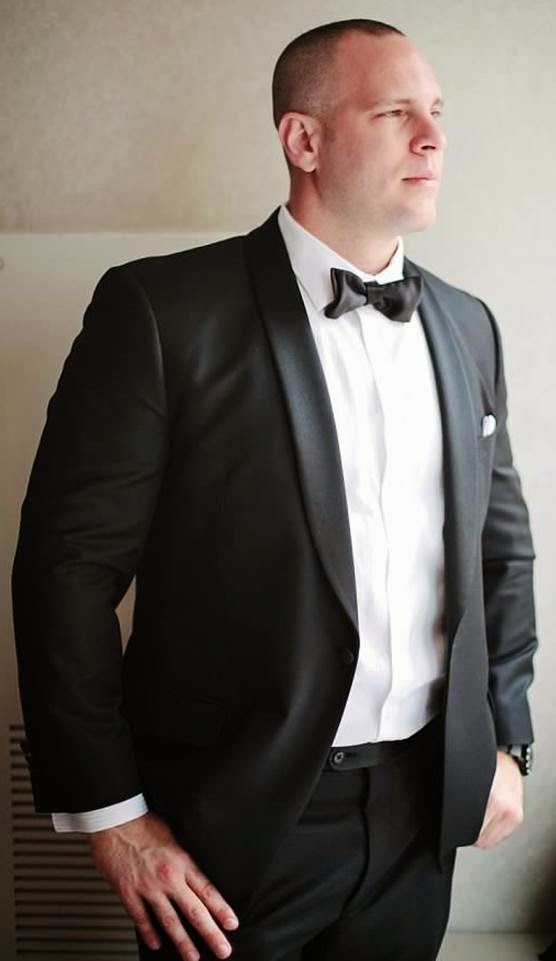 I am a Long Island, NY native and current resident of Northern Virginia. While attending the University of Maryland- College Park, the events of September 11, 2001 inspired me to join the U.S. Army ROTC program and volunteer for three tours of duty in Iraq and Afghanistan upon my commissioning into the Army Reserves in 2003. I hold three Master’s degrees and work in the defense industry.

The Spoils of Olympus has been a 2 1/2 year project that began in a Marriott hotel room in San Antonio, Texas while attending pre deployment training for a tour in Afghanistan in late 2011. The wars of succession immediately following the death of Alexander the Great have always fascinated me despite being overshadowed in the history books by the life and times of Alexander himself. Many great novels have been written about ancient Greece and Alexander but few fictional works have explored this forgotten era in western civilization where Alexander’s generals, who were once allies, battled each other for control of the largest empire on earth.

By the Sword is the first novel in The Spoils of Olympus series and introduces us to the story’s protagonist, Andrikos. The book follows him from an adolescence of criminality and capriciousness to his forced enlistment in the wars of succession; taking him from the battlefields of Asia Minor to the Achaemenid palaces of the Persian Empire. It is my hope readers will enjoy the story while learning about this important time in history.

Check Out All the Stops on Christian Kachel's The Spoils of Olympus: By the Sword Blog Tour Schedule