Whither Thou Goest by Anna Belfrage 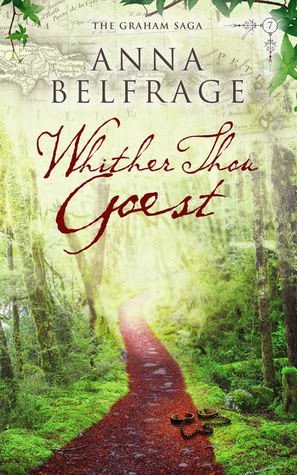 Whither Thou Goest is the seventh book in Anna Belfrage’s series featuring time traveller Alexandra Lind and her seventeenth century husband, Matthew Graham. In their rural home in the Colony of Maryland, Matthew and Alex Graham are still recovering from the awful events of the previous years when Luke Graham, Matthew’s estranged brother, asks them for a favour. Alex has no problems whatsoever ignoring Luke’s sad plea for help. In her opinion Matthew’s brother is an evil excuse of a man who deserves whatever nasty stuff fate throws at him. Except, as Matthew points out, Luke is begging them to save his son – his misled Charlie, one of the Monmouth rebels – and can Charlie Graham be held responsible for his father’s ill deeds? So off they go on yet another adventure, this time to the West Indies to find a young man neither of them knows but who faces imminent death on a sugar plantation, condemned to slavery for treason. The journey is hazardous and along the way Alex comes face to face with a most disturbing ghost from her previous life, a man she would much have preferred never to have met. Time is running out for Charlie Graham, Matthew is haunted by reawakened memories of his days as an indentured servant, and then there’s the eerie Mr Brown, Charlie’s new owner, who will do anything to keep his secrets safe, anything at all. Will Matthew deliver his nephew from imminent death? And will they ever make it back home?


Readers often talk about escaping into novels, about stepping into the shoes of another and living a thousand different lives between the pages of their books. It's an interesting concept and one I certainly subscribe to, but it takes new meaning with each installment of The Graham Saga. Where most authors capture a moment, Anna Belfrage recreates a lifetime, an intimate portrait that few of her peers can rival.

On the surface, Wither Thou Goest is an adventure. A quest that takes the Grahams from their comfortable colonial home to the turmoil of the West Indies. It is a rescue mission complete with danger, heartbreak and intrigue. Pretty straightforward stuff, until one looks beneath the surface. Behind the scenes, every member of the family is struggling with personal demons, the ripple effects of events seen in earlier installments of the series and while I love the drama created by Charlie's situation, I found the emotional foundation of the book far more captivating.

Sarah's plight was a challenge for me, as were Ian's struggle with responsibility, Matthew's private pain and Samuel's divided loyalties. Alex's attempts to navigate the storm while managing her own conflicts represented yet another obstacle, but the dynamic illustrated by the family's interactions created an engaging and intricately complex portrait of loyalty and honor and I love the inherent contrast it bore in comparison to Luke's branch of the Graham family as well as the Burley/Connor relations.

Beautifully written, thought-provoking and intense, Whither Thou Goest lives up to its predecessors in every possible way. A must read for any fan of historic fiction.

His mouth stretched into a mirthless smile. No doubt Graham thought him well and truly dead, for how was someone to survive disfigurement and pain such as the one he had been subjected to?