Crime at Mayerling: The Life and Death of Mary Vetsera by Georg Markus 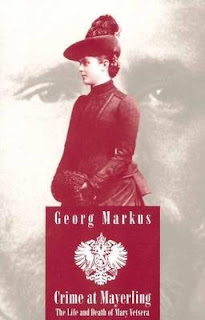 Crime at Mayerling deals with two of the most sensational crimes committed during the past century. Although separated in time by a hundred years, the two events are inextricably connected. In January 1889 the corpses of Archduke Rudolf, Crown Prince of Austria-Hungary, and the Baroness Mary Vetsera were discovered in the prince's hunting lodge at Mayerling, near Vienna. The circumstances were hushed up and for decades scientists and historians had been trying to solve the mystery of what had happened at Mayerling. An Austrian "Mayerling buff" felt compelled to reach an explanation in his own way: in December 1992 he stole the coffin with the Baroness's remains and had them examined by forensic specialists. Markus describes the remarkable findings which finally resolve the mystery of Mayerling.


Crime at Mayerling is one of the first nonfiction titles I would recommend to anyone interested in the tragedy. It isn't the most detailed text on the subject, but it is a pretty decent introduction. The text is straightforward, easy to follow, and not overly detailed politically.

Another major selling point is that author Georg Markus was literally on the front lines of the latest twist in the Mayerling story. In 1991, Helmut Flatzelsteiner, in his obsession with the case, removed the remains of Mary Vetsera from her grave in Heiligenkreuz. Markus became involved in 1993 when Flatzelsteiner tried to sell the story to various media outlets. His book is an account these events as well as the 1889 murder/suicide.

It was published in 1993, ahead of the examination reports on Mary’s remains. Depending on your particular interest, this could be a positive or a negative. I personally didn’t care much either way, but other readers may feel slighted by the omission.

Crime at Mayerling is the most recently published nonfiction available in the United States which is sad as it is nearly two decades old. That said, it is the most concise version of the story and though I don’t think it the best volume for those already familiar with the case, it is by far the best English language primer available regarding the mystery.

January 30, 1889, caused indescribable horror throughout the world. Crown Prince Rudolph who, as future King of Austria-Hungary, was destined to guide the fate of a gigantic empire, died in a mysterious way in his hunting lodge at Mayerling near Vienna. In the first reports there was no mention of violence nor anything about a second corpse.