Obedience: A Novel by Jacqueline Yallop 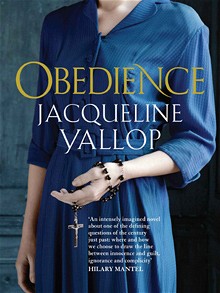 
Set in contemporary and World War II France, this is the story of Sister Bernard: her forbidden love, her uncertain faith, and her guilt- ridden past. A once -bustling convent in the South of France is closing, leaving behind three elderly nuns. Forced, for the first time, to confront the community that she betrayed decades ago, Sister Bernard relives her life during the war. At thirty, Sister Bernard can hear the voice of God-strident, furious, and personal. When a young Nazi soldier, a member of the German occupying forces, asks her to meet him in the church in secret one evening, she agrees. And so begins the horrifying and passionate love affair that will deafen the heavens and define her life, tempting her into duplicity. Obedience is a powerful exploration of one woman's struggle to reconcile her aching need to be loved with her fear of God's wrath.

I am a World War II fanatic so I find it very difficult to admit I have managed to find a fictional war story that I am not particularly fond of. The premise is intensely interesting and I believe the story itself had a lot of potential but the flawed execution detracted so much from the piece that I found I couldn't enjoy the reading.

The constant movement between past and present plot lines did little to enhance the drama of the piece. I actually found it distracting and at times very annoying. I also felt the structure was inappropriate for such a subtlety written novel. The personal and emotional themes barely took root before the reader was abruptly ripped away.

The fragmentation that resulted from this format faux pas also made it difficult to get to know and appreciate the characters. As a reader I felt distanced from the cast and as such didn’t care about the outcome of their experiences. I had nothing but indifference for Bernard’s suffering and isolation. It is one thing pen a bleak story but the impact of such works is in their ability to reach the hearts of their audience. Obedience fell flat in the attempt.

Bernard’s story is unquestionably thought provoking but I cannot recommend the book to the casual reader. The ambiguity that characterizes the novel requires much effort and more than a little determination to navigate. Still, I can’t disregard the haunting beauty of what Yallop put together in Obedience. Three stars.

Bernard heard the plea and knew there was something she should be making of the moment. But she could think only of the soldier, everything about him coming clear and close...