The Secrets of a Vatican Cardina by Celso Costantini 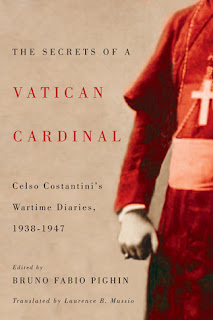 On 19 April 1940 Celso Costantini prophetically wrote in his diary that if Italy followed Hitler into war, it would be allying itself with the "Anti-Christ." Within weeks, Mussolini's fascist regime plunged Italy into the destructive maelstrom of global military conflict. The ensuing years brought world war, the fall of fascism, occupation, liberation, and the emergence of a new political order. The Secrets of a Vatican Cardinal is an extraordinary and detailed behind-the-scenes account of crucial episodes in Europe's wartime history from a unique vantage point: the Vatican and the Eternal City. Costantini, a close advisor to Pope Pius XII, possessed a perspective few of his contemporaries could match. His diaries offer new insights into the great issues of the time - the Nazi occupation, the fall of Mussolini, the tumultuous end of the Italian monarchy, the birth of republican democracy in Italy, and the emergence of a new international order - while also recounting heartbreaking stories of the suffering, perseverance, and heroism of ordinary people. Less than a century later, with the world's attention gripped by the first papal resignation in six hundred years, The Secrets of a Vatican Cardinal presents a clear-eyed, fascinating, and complex portrait of the Roman Catholic Church's recent history.

I picked up The Secrets of a Vatican Cardinal by Celso Costantini on a whim. WWII is my thing and simply I couldn’t resist the temptation of wartime diaries written by a senior official living inside the Vatican during the conflict. I’m not sure what I anticipated, to be honest I’m usually sold on anything relating to WWII before I’ve a chance to formulate much of an opinion, but the reality of the diaries blew me away.

Costantini’s prose is powerful to say the least. He writes with unfiltered passion about both religion and politics and I found his insights and perspective fascinating. I was further captivating by his command of language. Simply put, contemporary authors don’t write like this anymore. Somewhere along the way we’ve sacrificed linguistic elegance for base exposition, but I suppose that’s neither here nor there when assessing the qualities of Constantini’s work.

The book is packed to the brim with footnotes, which is great if you need to reference something, but I personally felt the sheer volume of additional information distracting. At five hundred and twenty-four pages, The Secrets of a Vatican Cardinal is not a quick read, but I felt it unnecessarily weighted by an overabundance of surplus description.

Minor complaint aside, I have to say that I loved this volume and am happy to have added it to my personal reference library. I’m not sure I’ll be recommending it very often as I don’t know many other enthusiasts, but it is definitely something I’d commend to anyone interested in Italian policy and social affairs between 1938 and 1947.

What bitterness. What moral debasement. One must not forget that genuine liberty is an element of human dignity; although masters sustained their slaves, the latter were still slaves: they were treated as objects, not men. “Paucis vivit genus humanum,” Tacitus wrote. The human genus was a minority compared with the great mass of slaves. This was a monstrous situation and was abolished. How is it that Mussolini did not understand this – he who fought and suffered for freedom? Is he acting in good faith? Has he a logical pattern of thought?